An emotional tear-jerker, YINDI The Last Koala, follows the life of a most extraordinary koala.

On a straight-forward viewing level, this program is filled with superb shots of koalas in all their moods, cute and cuddly through to aggressive fighters.

On a deeper level, the film traces the national plight of the koala, an Australian icon that is facing a very real threat to its future survival.

There are some truly astonishing images, recorded over the period of 12-months by a series of film crews along Eastern Australia: Viewers are treated to an amazing hairless baby Yindi suckling its mother's teat in the pouch. There follows a car accident, which so injures the mother that a still-minute and hairless Yindi is thrown clear, and has to be hand reared. Never before has such a fascinating event been recorded on film.

Yindi and mother are finally re-united, to be released into the Australian bush, where we follow all of their wild activities, from loud and vicious fighting through to amorous love making. Gripping moments as a now hair-covered Yindi emerges from the pouch and begins to explore the outside world for the first time.

Both mother and baby become trapped in a bushfire, with hair raising minutes spent escaping the intense flames and smoke. A still very young Yindi swims to safety across a waterhole, only to be rescued and taken into home care. Here Yindi is raised in a rural homestead... washed and weighed, and hand fed. The work of other koala carers is also documented, from the koala who sleeps in a regular bed, through to the agile baby koalas who perform acrobatics on curtains and ladders. The work of rescuers is recorded, from special koala hospitals through to relocation programmes.

Throughout this very moving special, the growth and development of Yindi is recorded, leading to his final release into the wild. Along the way, we see the other big koala killers, such as dog attacks, the effect of expanding housing developments, and the disease of chlamydia.

While viewers are led to a very definite conclusion about the future of the koala, it is handled in such a way as to leave viewers feeling that there is hope that it can survive in the wild. The film has been scripted and presented in such a manner that viewers will be subjected to a range of emotions, ultimately leading to hope and happiness. 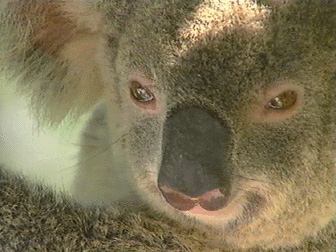