This gripping wild life documentary features all of the many diverse creatures that roam much of Africa, from the big cats, elephants and giraffes, through to highly endangered species such as the black rhinoceros and wild dog. The programme shows how their daily ritual is aimed at just one result... survival, but how the very survival of entire species is increasingly in danger.

At the start of the 20th-century, the major species roamed most of Africa - with the exception of the Sahara and the jungles. One hundred years on, their territory has contracted dramatically. It's in this context, the daily law-of-the-jungle fight for survival for individual creatures, and the new fight for survival for entire species, that this documentary documents the majesty of Africa's superb wildlife:

The programme begins with a spectacle of awesome proportions. The annual migration of the wildebeest, showing the attacks it comes under from crocodiles and lions.The daily ritual of lions is documented, from mating and hunting, to attacks they come under from baboons.

The programme follows a group of baby elephants, frolicking in the waters of Botswana's wildlife rich Okavango Delta and shows what highly intelligent creatures they are, speaking a complex language with which they can communicate over great distances.

Other animals featured include:

* A graceful and agile leopard, with superb shots of drinking, hunting and eating.
* Two black jackals and their meal, under attack from hyenas.
* The seriously endangered African wild dog, or Cape Hunting dog.
* The aggression of hippopotamus.
* The decimation of the black rhinoceros by poachers.
* The cape buffalo, the rare aardwolf and serval cat.

The programme concludes with the cheetah, including the King Cheetah, only forty of which exist. The incredible speed of the cheetah is demonstrated as she surges up to 112 kilometres an hour in successful pursuit of a Thomson's Gazelle.

The documentary concludes on a positive note, with a captive breeding programme for cheetahs showing tactics that can save still more of Africa's superb creatures from disappearing forever. 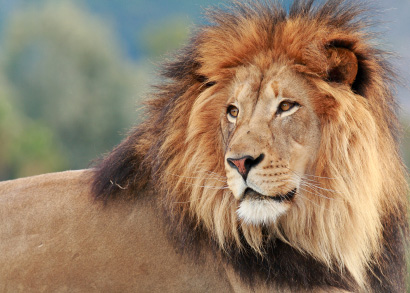