The remarkable story of Jarunee

The remarkable story of Jarunee, an adorable baby gibbon in Thailand. From scenes of despair - their brutal treatment at the hands of bar-owners and tourist operators - to moments of sheer joy as loving carers swing their pet gibbons on vines. The ultimate thrill comes at the programme's conclusion as the gibbons are released - in a new experimental trial - into the wild.

Every detail of Jarunee's life is captured on film, starting with her moment of birth. We watch her grow, drink, feed and play, as she steadily weans herself from mother. There are moments of sheer exhilaration as she begins to sing and swing.

As the powerful message of the programme unfolds, we hear her haunting songs, meant to keep other gibbon troops at bay. However, their cries have done nothing to deter a far more threatening predator. Man has been responsible for widescale slaughter, cutting numbers from one million a century ago, to just one hundred thousand today.

The cause for hope this programme gives is that out of this carnage has emerged a strong campaign to save this ape, no gibbon better exemplifing the face of that new optimism than Jarunee.

Hers is a most uplifting story: hunters and captors, raids and rehabilitation, as this adorable creature struggles - against all odds - to survive.

Wonderful scenes in the wild in the Khao Yai National Park, as well as gibbons being captured, their life in captivity, police raids, rehabilitation programmes and their return to the wild. 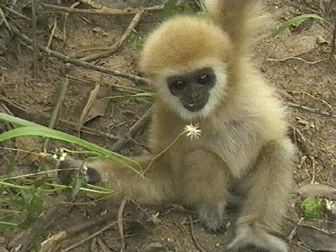