A joyous celebration of kittens of every conceivable kind

Grainger Television Australia Pty Ltd has been commissioneKittensd by the international television distributor Southern Star to produce the definitive documentary on kittens. The programme is intended for international distribution, with previous programmes created by Grainger Television being screened by both Discovery's Animal Planet channel and the National Geographic channel.

CUTEST KITTENS will be a joyous celebration of kittens of every conceivable kind, from those that swim to the pampered pussies being groomed for TV advertisements and movies.

This one-hour special starts with a tasteful montage of pregnant cats, kittens being born and the mother¹s first licks, followed by the first weeks of the young kitten¹s growth and the attention lavished on it by its doting mother.

By 6 weeks old, the kittens are into a playful mode, their every leap and tumble is captured, leading us to the more mischievous moggies as they get up to mischief of all kinds, upsetting cans of paint, causing havoc in the kitchen and creating general mayhem.

The programme will show the amazing diversity of breeds, from those that love water and swim and play under the hose, to those that are aristocratic, fluffy and hairless. We'll show the entire range of kitten behaviour, from the twitching of whiskers to the arching their back, explaining the meaning and motive of all of them.

PAMPERED PUSSIES shows kittens being indulged in establishments specialising in kitty care, from grooming through to manicures. The programme climaxes with SHOWTIME, where the kittens that have starred in this programme are taken to public shows, for exhibition and judging.

It's all on show in CUTEST KITTENS, the quintessential special that shows us everything wonderful from the delightful world of kittens. 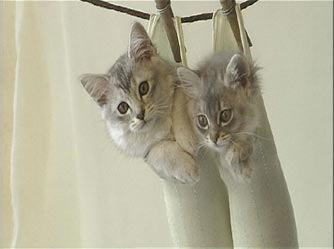