Grainger TV’s latest production being launched at MIPCOM in Cannes:

The WHALE WHISPERER documents the inspiring relationship between whale lover VICKI NEVILLE and the humpback whales that come to play and socialise in a unique bay off the coast of Queensland Australia.

Vicki gets us in close for a look at the whale’s big repertoire of social play, from peduncle slapping and spy hopping to phenomenal breeches, where whales 11 times the size of an elephant launch themselves skywards like a Polaris missile, only to crash back down onto the waves with an enormous splash.

Never before seen behaviours have been documented by a team of 5 cinematographers over the three month whale season in Hervey Bay, all captured in glorious 4K format.

As the cameras follow Vicki, she shows us HEAT RUNS, aggressive fighting between pods of male humpbacks as they fight one another for the attention of a favoured female.

She takes us to Mothers and their new born calves, where the proud female whale teaches her youngster all the behaviours necessary to survive in the wild waters of the Southern Ocean.

And she shows how proud the Mothers are, pushing their new born calves towards Vicki in a symbolic ritual that proves what feelings they have, and how they want to communicate to humans.

The climax of THE WHALE WHISPERER comes under the waves, as Vicki swims ever so close to these majestic beauties. Stunning close encounters, where extremely inquisitive whales cavort close to Vicki for up to 4 hours at a time.

They are at once highly intelligent, master navigators as they swim between the Antarctic and the tropics every year, and extraordinarily graceful, especially given their massive size.

Whales like you have never seen them before, interacting with professional whale guide Vicki Neville in a 50 minute TV special that will leave viewers in awe. 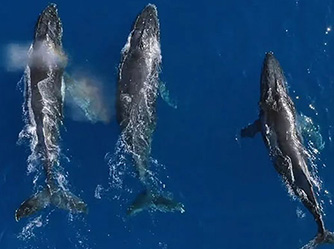