Mysteries of the Mekong

A trip down the Mekong River, through the heart of Laos, Cambodia and Vietnam

MYSTERIES OF THE MEKONG documents a trip down the Mekong River, through the heart of Laos, Cambodia and Vietnam.

Producer/presenter GREG GRAINGER uncovers some of the great mysteries of the Mekong, such as the Plain of Jars - fields of giant stone containers - and the remains of the Khmer empire around Angkor Wat.

This journey begins at the notorious Golden Triangle that links Thailand, Burma, and Laos and takes us on a fast boat ride down the Mekong River.

* The primitive ceremonies of remote hilltribes: Sharmen, opium smoking, funerals, women chewing beetel nut.
* The biggest festival ever staged on the Mekong.
* The woman who could have been Queen of Laos
* The tunnels of the Vietcong
* A Church service that observes the best of all major religions
* The limestone caves of Pak Ou, filled with statues of the Buddha.
* A troupe of classical Laotian musicians, using instruments like this Ken... and a bamboo xylophone known as a ranaat ek.
* The National Game of Laos featuring 35 players a side.
* Ho Chi Minh's former home
* A series of extravagent mausoleums, the Royal Tombs, including the eccentric emporer Tu Duc.
* the grand banquets Emporer Tu Duc inspired re-created in the palace of one of his successors, King Khai Dinh.
* Quaint Hoi An with its Japanese covered bridge and colonies of silk worms. 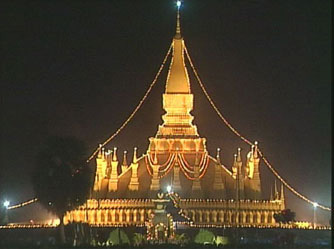