The Marvels of Madagascar

THE MARVELS OF MADAGASCAR features the unique animals - such as lemurs and chameleons - which have evolved in the Garden of Eden that is Madagascar.

Also featured are the colourful Malagasy people, with their wrestling competitions and music festivals.

The most active of Madagascar's 32 species of lemurs are shown, including the dancing lemur, the Sifaka, which stands upright and shuffles sideways to move.

Ring-tailed lemurs are shown with their new-born babies, a nursery in motion. In addition, we witness the daily ritual where they spread their arms and squat, to take in the warmth of the first rays of sunlight.

Madagascar's largest and most elusive lemur, the Indri, is shown leaping through the rainforests and emitting its range of alarm and communication calls.

There's also a fascinating sequence with Madagascar's largest chameleon, the Parson's chameleon, where it catches insects with its lightning-fast elastic tongue.

The documentary addresses the threat to all of Madagascar's unique creatures, as slash-and-burn farming wipes out most of their habitat.

* The breakfast bandits. The raiding parties of lemurs on human breakfast tables. * The giant baobab trees, including sunset at the Avenue of Baobabs. * OFady', the complicated system of beliefs and superstitions that is still practiced by most Malagasy people today. 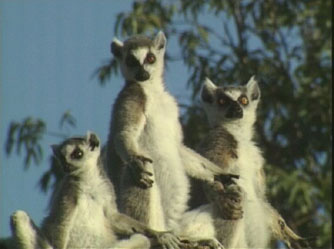