Encapsulates all of the beauty, characters, attractions and major events of Sydney Harbour

MAGIC HARBOUR encapsulates all of the beauty, characters, attractions and major events of Sydney Harbour. Producer/presenter GREG GRAINGER traces a day in the life of the Harbour, from fishermen filling their boats knee deep with mullet, to sea pilots boarding incoming ships in mountainous seas.

The programme begins with the Harbour just before sunrise, as rowers and swimmers work out in pre-dawn light. Slipping quietly up the western channel is the majestic QE2

As daylight breaks, millionaire businessman Rene Rivkin takes flight off the back off his super cruiser in his seven seater helicopter. Around the foreshores, homes of all standards, from multi-million dollar mansions, to squatter¹s shacks and houseboats. Wildlife abounds, from colonies of fairy penguins inside the Heads, to exotic African species in Taronga Zoo.

Personalities such as artist Ken Done and his waterside cave are visited, as is the Governor General, Sir William Deane, in Admiralty House.

The diverse moods of the Harbour are seen, from raging storms and thick fogs, to sunny days in which inner Harbour beaches are filled with thrill seekers. Pleasures such as scuba diving and para-sailing are on display, as are the delights of climbing the Sydney Harbour Bridge, or sailing the square rigger, the Bounty.

The workers of Sydney Harbour are shown as well, from the volunteers who restore the superb historic vessels of the Heritage fleet, to the jet ski patrol in pursuit of offenders.

MAGIC HARBOUR concludes with classic festivities, such as the Australia Day celebrations, the start of the Sydney to Hobart yachting classic, and the giant fireworks spectacular of New Years Eve. 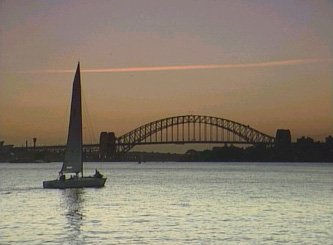