THE CHERRY BLOSSOM TRAIL follows a revered time of Oriental beauty in Japan known as Hanami: that time when the fruit trees come into bloom.

In a trip from the far south of Japan to Mount Fuji, THE CHERRY BLOSSOM TRAIL captures all that is unique in Japanese culture, from sumo wrestlers to geishas.

The blooming cherry blossoms, known as sakura, symbolise the end of a hard winter, and the true start of spring and new life, with abundant celebrations staged across Japan.

* a hundred kimono-clad women playing kotos in front of the spectacular HIMEJI castle.
* a traditional tea ceremony in the exquisite Ritsurin Gardens.
* a Shinto shrine built in a cave more than 2-thousand years ago.
* a rowdy festival and a hot sand bath in the hot springs settlement of Beppu.
* the historic Samurai quarter of Hagi and Japan¹s smallest volcano.
* the Peace memorial park in Hiroshima with its mountains of paper cranes, folded by school children from all over Japan.
* the island of Miyashima, with its famous floating shrine of Itsukushima, surrounded by thousands of mussel collectors.
* a ferry trip across the Inland Sea to the island of Shikoku.
* gorges filled with giant carp-shaped silk flags, and a bridge made of vines.
* thousands of white-clad Buddhists on a pilgrimage to Mount Konpira.
* the potters of Bizen, famous for its unglazed pottery.
* Kyoto, the cultural capital of modern Japan, with a comic pantomime, known as kyogen.
* a party of businessmen being entertained by that increasingly rare hostess, the geishas.
* sake-making at the Gekkeikan Sake Brewery.
* picturesque thatched houses in the village of Shiragawa.
* giant floats, illuminated by special lanterns, paraded through the streets of Takayama. 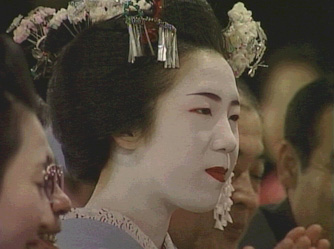