The Magic of Africa

Producer/presenter Greg Grainger goes on the ultimate African safari, joining a vintage steam train in Tanzania for the first rail trip ever permitted through to South Africa. Along the way, he experiences all of the great African adventures, from big game safaris, through to the majesty of Victoria Falls and the splendour of Cape Town.

The trip begins in the rowdy shoreside fish markets of Dar es Salaam, and moves on to big celebrations, as the 1920's-style train departs on this historic journey. All of the onboard adventures are superbly documented, from water shortages through to delaying derailments.

On safari in the Serengeti, follow the world's greatest migration - that of wildebeest and zebra - with attacks by crocodiles and lions. Other wildlife experiences include lions being attacked by baboons, and a cheetah chasing and killing a gazelle.

* A Masai village, with its chief and numerous wives, colourful ornaments and energetic dancing.
* A Noah's Ark of wildlife, the Ngorogoro Crater. Stay in a luxury tented camp.
* In Victoria Falls, meet the flamboyant Mr Wonderful, go rafting down the Zambesi River and ultra lighting high over the Falls.
* In South Africa's Kruger National Park, go on safari with a master tracker, watching lions kill and mate, followed by some rare wild dogs and black-backed jackals.

Above all, this film superbly conveys the true majesty of Africa - its brilliant array of wildlife, people and scenery. 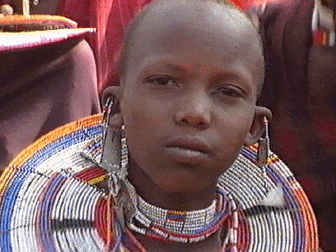