The Delights of Turkey

THE DELIGHTS OF TURKEY is a fast-moving adventure around eastern Turkey. Producer-presenter GREG GRAINGER joins a team of motorbike riders as they explore Turkey's exotic blend of Asia and Europe, from belly dancers and cave cities, to ancient Roman settlements, and cliff sides of calcium.

* The dance of the whirling dervishes, with its ten dancers, known as Semazens
* The entrancing city of Istanbul, with its massive mosques, including the Blue Mosque, with its gleaming blue tiles, and St Sophia, the greatest church in the entire early Christian kingdom.
* The war-time hot-spot of Gallipoli, where school children pay homage to war heroes from their home town.
* The legendary Trojan horse.
* A hot air balloon ride over the home of the Troglodites.
* The production of Turkish delights.
* The Roman ruins of Ephesus, providing a good example of what it was like to live in a Roman city.
* The thermal spas at Pammukale, with rejuvenating pools & strange formations.
* The moonscape settlement of Cappadocia, with its numerous underground cities, and home to thousands who still live in caves.
* The Turkish capital of Ankara with its imposing limestone Anitkabir - the mausoleum of the founder of modern Turkey, Kemal Ataturk.
* Safranbolu, a small town of well-preserved Ottoman houses and home to the growers of that exotic and very expensive spice, saffron. 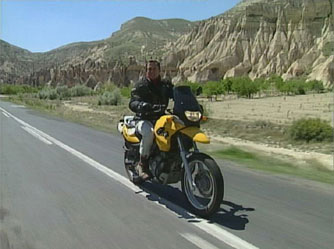