Heroes of the Amazon

Deep in the upper reaches of the Amazon Basin

Deep in the upper reaches of the Amazon Basin live many remarkable characters, whose daily lives in the modern 90s resemble that of ficticious story book characters from days of old. This film captures the true essence of the Amazon, its legendary wild jungles, and its superb array of wildlife, seen through the eyes of some outstanding personalities.

In a series of expeditions through the upper Amazon, into Colombia, Ecuador, Peru and Brazil, meet many of these modern-day living legends, observing their fascinating practices.

Tony Vargas is a modern-day Tarzan, a long haired native of Leticia, who's grown up and now lives with wild animals. Boating up the Amazon with his two pet monkeys, Tony swims with giant snakes - Boa Constrictors and Anacondas. He wrestles with a tamed Jaguar, and mixes with giant ant-eaters and tapirs.

Tony leads us to native tribes like the Yaguar, a near naked people, eking out a subsistence living along a remote tributary of the Amazon. On the Isla de Micos Tony is set upon by dozens of macacos monkeys, who jump all over his body.Tony swims amidst giant water lillies, chases pink dolphins as they cavort upstream, and catches giant fish with a hand spear.

In Ecuador, Swiss environmentalist Angelica Ruben is on a one-woman mission to save endangered wildlife. She's set up a huge reserve to care for and breed species under threat. Travel with Angelica as she cares for many beautiful creatures such as ocelot, tapirs and monkeys. Angelica explains about her Swiss Institution and how she's setting out to buy more jungle to save it from exploitation by giant mining companies.

Other characters visited include families working the banks of the Amazon for gold, the boat men who have to push their big motorised canoes up shallow rapids, and the jungle lovers - dedicated environmentalists who lead us to stunning lakes to observe some of South America's most adorable animals in their natural environment. 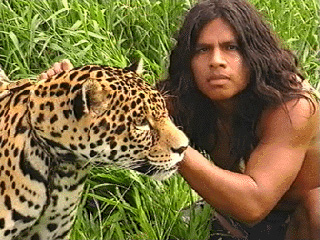