The Antarctic has been described as the last great wilderness, a land rich in untouched scenic wonders and wildlife.

ANTARCTICA ALIVE captures the true spirit of this ice bound territory, as producer/presenter GREG GRAINGER sails down the Antarctic Peninsula for a series of adventures.

There are very close encounters with whales, first as giant humpbacks nudge right up to the expedition zodiacs, flashing their giant tales high in the air.

Later, a big minke whale bow surfs infront of their vessel, while a group of killer whales go on a feeding frenzy.

As the expedition sales along coastal glaciers, huge slabs of highly volatile ice collapse in front of them, only to be transformed into the most exquisite formations.

The expedition visits the rookeries of several species of penguins, marvelling at the interaction between parents and hungry chicks and horrified as a leopard seal attacks.

They visit several former British bases, one taken over by the Ukranians who measure the hole in the ozone layer in a highly comical fashion.

There are moments of high exhaltation as the expedition cuts through thick pack ice to cross the Antarctic Circle.

Climax of this expedition is to climb an unclimbed mountain, and the team warm up for this by practicing on ice bergs.

Finally they face the challenge of their trip as deep crevasses threaten to block their trek upwards to a stunning peak.

Greg Grainger has described this trip as the most challenging and rewarding of all his expeditions, and when you see the scenery and wildlife and adventures they face, you’ll understand why. 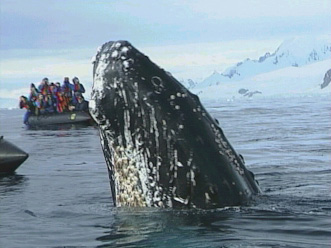