He has filmed extensively around the world and has filmed more widely in the Himalayas than any other individual, including several documentaries with Sir Edmund Hillary, and a Sea to Summit climb of Mount Everest.

He has received Emmy nominations for his work on the National Geographic Television Special "Those Wonderful Dogs" and the US reality series "Survivor".

Recent projects include walking over 800 kilometers through various Australian deserts documenting several charity walks, including 2 Simpson Desert Crossings, and filming a television series in Africa and Indonesia that covered every species of the great ape.

Michael's filming projects for GraingerTV have taken him from the Antarctic to Madagascar. 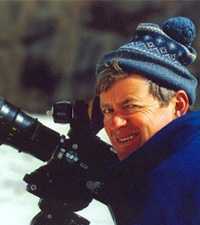